Inspired by my previous two trips, it was time to tackle one of the most popular, and yet most difficult, destinations – the airport in the sky on the island of Catalina.

Why does the airport have such a reputation? First, it lies across the ocean from the mainland, the shortest over-water distance being around 26 miles, beyond the gliding distance of the plane in the event of an engine failure. Second, because it lies further west than the mainland the marine layer (and therefore the low lying cloud) often lingers there longer than at home. It is not uncommon to find yourself unable to take off because of low clouds. Third, the airport is on top of a flattened mountain and is therefore akin to landing on an aircraft carrier: each end drops off to the valley below. However, the winds were only 5 knots and the sky was clear so I invited Adrian to come along and see what we could manage.

We departed 28R straight out towards the coast. The warmer weather inhibits the climb performance of the plane and so rather than climb above the Class B airspace at the coast, we remained beneath it at 1500 feet until it was safe to ascend. The north county coast was a little hazy so the views over the beach were not as good as we might have expected. The chart shows a “recommended” route to Catalina which has you track the Oceanside VOR to the VOR and then head west tracking the Catalina VOR to the airport. I did a reasonable job of tracking to Oceanside, though certainly not good enough for instrument flight. We turned west towards Catalina and soon we were over the ocean.

My GPS shows “cones of safety”, if you are within one of the cones on screen then you can most likely make the airport inside that cone if the engine was to fail. We watched as plane on screen left the last cone and we entered the point where the only place we could land would be ocean. Before leaving the airport we had tried to pick up the life vests from the flying club’s locker but they weren’t there. Even more reason we did not want an engine failure.

It was not long before we could see the island coming into view: 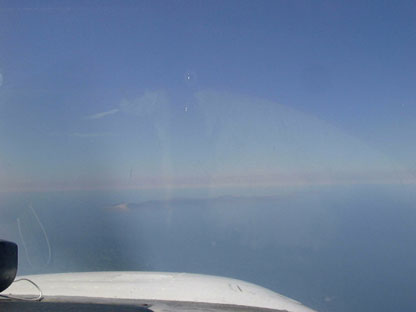 As we got closer we could clearly see the small town of Avalon and, to the north, what looked like the runway perched on top of a mountain ridge. Since neither of us had ever been to Catalina I decided to lose altitude (we had crossed the ocean at 6500 feet but the airport is only 1400 feet) flying over the south of the island and loop around to the north to enter the pattern for the airport. As we flew over, Adrian took these pictures of the view looking north and the town of Avalon: 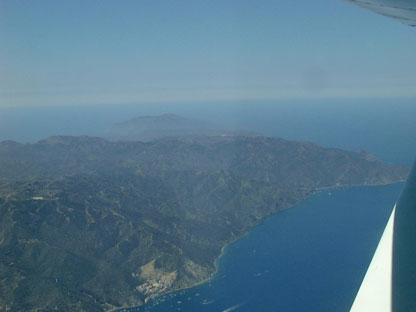 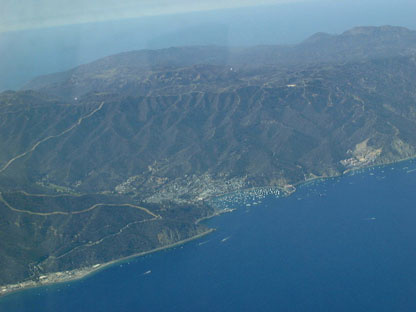 As we crossed Avalon we called up the airport UNICOM and asked for permission to land. The airport is private and requires a landing fee ($10 in our case). In the whole time we had been flying towards the airport we had heard only about 5 planes arriving or departing so it was going to be pretty quiet when we arrived. The route northwards took us towards a place called Two Harbours: 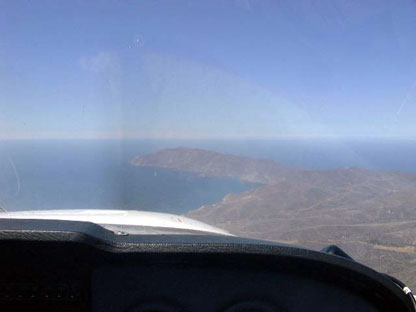 At this point we passed over what would be the departure end of the runway and got this picture that shows just how interesting an airport it is: 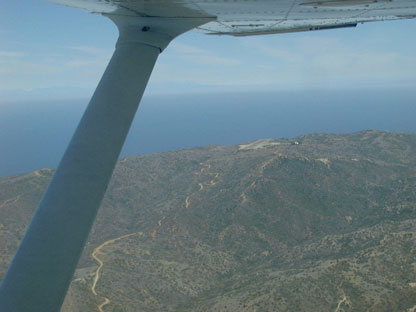 The traffic pattern is very interesting to fly as there are just no visual clues as to how well you are doing on the approach. Several times it looked like we were beneath the runway although the altimeter told the truth. I flew a very slow pattern and put it right down on the numbers in what was a pretty excellent landing. It is possible that the approach was too low, there are warnings of downdrafts just before the runway and, although I was ready to add power should we have encountered one, I could probably have done with being higher to be safer. The thought of landing too fast (and therefore not stopping before the end of the runway!) was certainly in my mind and I was pleased that my landing was good enough for us to take the first taxiway to parking. With some crosswinds and other traffic around I am sure that the landing can be quite eventful!

We parked the plane on some grass and paid our landing fee in the airport office. The airport lies at the top of a nature conservation centre and so there is a gift shop and plenty of tourist buses arriving for the shop to take some money. The airport buildings also has a restaurant which has a reputation for an excellent buffalo burger – something I can hereby vouch for, quite tasty indeed. After some exploration we were forced to leave so that we could get the plane back for the next booking. The trip back was as uneventful as the trip over, MYF was extremely busy as we flew down from Oceanside but by the time we had arrived it had quietened down and I did a reasonable, but not great, landing on old 28L.

All in all, a most excellent trip and certainly what flying is all about. I am sure I will return there many times – and I hope that I do as well those times as this one. Sadly my digital camera decided to act up after the last picture above so I don’t have any other pictures from the trip. If you want to get some more views there are some excellent pictures at a fellow pilot’s website at this link.