This was a landmark trip – my first cross country flight to a brand new destination, and with Teri as a passenger.

I had long been taken with the idea of flying to Hesperia after seeing the ads for it in the Pacific Flyer newspaper. Hesperia lies approximately 144 miles to the north of San Diego and to the east of the LA basin. It was recently purchased and is being renovated by a German couple who hope to turn it into a fly-in resort.

The weather had been iffy all week but we were greeted with a near-cloudless sky when we arrived at Montgomery Field. The plan was to fly up the coast for some sight-seeing before cutting north-east bound to intercept and follow Interstate 15, then Interstate 215 past Riverside and Ontario and through (or in our case over!) the Cajon Pass; the airport lies almost immeadiately beyond the pass.

We took off straight-out on 28R and stayed outside the Class Bravo airspace as we folowed the coast. Unknown to us the Carlsbad flower fields were in bloom and Teri snapped a great picture: 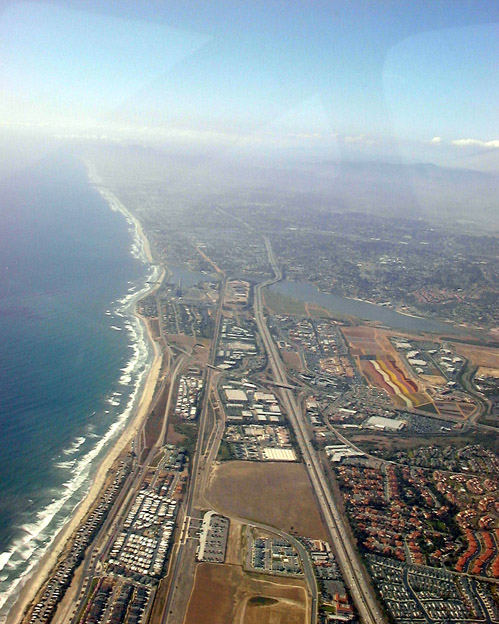 After reaching Palomar airport we turned inland and followed the 15 north. This method of navigation, known as pilotage, is very enjoyable. We used no radio navigation aids the whole trip, everything was done by looking out of the window and matching landmarks (mostly roads) to the chart. It was interesting to see the 215 and Riverside beneath me given the number of times I had driven that route when I was dancing with Lucie.

The trip was a little bumpy in places when we passed under clouds. This turbulence is caused by the rising of air underneath the cloud and is to be expected whenever you pass close under a cloud. We also encountered some bumps when we flew over the Cajon Pass. Teri saw the airport before I did and we turned early to head towards to it.

There was no answer from the Unicom and no other traffic in the pattern so I set up for the usual runway. We got bounced around in the pattern pretty badly and the crosswind we met on final was enough for me to decide to go around and try again. A second wider and longer pattern had me on a much better approach and made a landing that surprised even me. We taxied off the runway and headed towards the general parking, surprising some people who were on the taxiway spraying some weeds, somehow they had failed to notice our arrival.

Sadly my lunch was uninspiring (burger under cooked and fries too soft) but Teri enjoyed her first “$100 hamburger”. After eating we chatted briefly to one of the owners before heading back to retrace our route.

On top of the Cajon Pass I called up LA Centre for flight following and had them look after us for the return trip. On the way we heard two student pilots on solos who were lost (or at least misplaced) which made me wince, that must feel awful. Our trip back was fairly uneventful, I fell foul of the controller at one point when I had been lapse about keeping my altitude and was asked to return to the right one but no big deal. After Fallbrook we turned back towards the coast (surprising the controller who was going to vector us direct through the Class B airspace) and got another picture of the coastal towns: 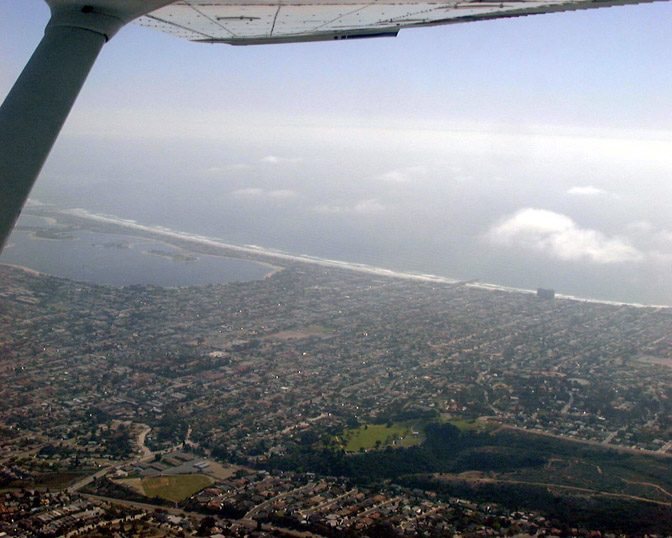 Over Torrey Pines we called up Montgomery Tower and were cleared in to 28L as expected. In order to avoid the outbound traffic we flew past Mt Soledad and turned inbound just before Mission Bay: 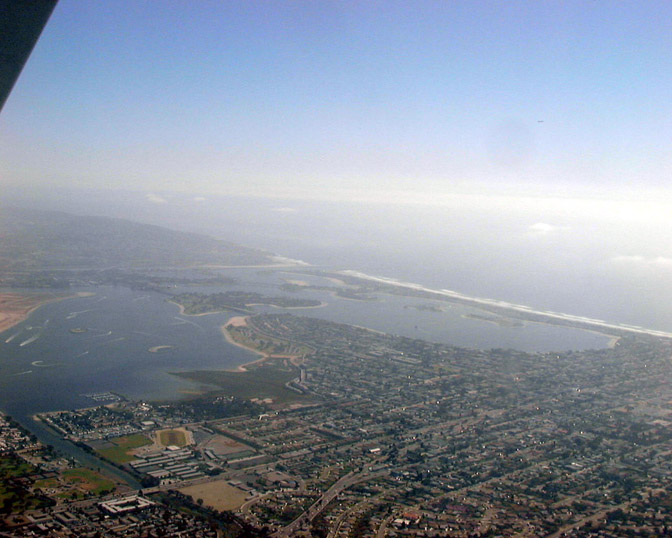 The pattern was uneventful and I made another nice landing to end a very enjoyable first cross-country trip to a brand new destination.