Another new destination, Chiriaco Summit that had been on my list of must-fly-to places, this time because it is supposed to have some of the best airport food in the State. It turned out that good view was not all there was to enjoy.

My passenger for this trip was my friend Adrian who is a budding helicopter pilot and general lover of all things aviation, he gladly accepted my invitation to come with me. These trips are definitely more fun with a passenger.

Our route was to be a right downwind departure from Montgomery Field, turning north-eastwards over Julian, then more easterly passing over Borego airport, the Salton Sea and to the field. The trip was uneventful and we had good views over the hills and desert. We passed over the NW tip of the salton sea and picked up route 10 east-bound. The airport appeared more quickly than I had expected but not too quickly that we could not descend in time. The airport lies between two mountain ranges and they were causing some swirly winds and my first pattern was not up to the job of landing in the crosswind that seemed to be almost perpendicular to the runway. A second, longer final, approach had me lined up and did an amazingly good crosswind landing. There was only one other plane at the parking lot, we tied the plane down and went to eat.

The restaurant had a very good menu and the food turned out to be very good. However, rather than be remembered for the food I think we shall remember the trip for the seemingly never-ending supply of good-looking women who came in and out of the restaurant. I swear there must have been a coach or two outside letting them out 3 or 4 at a time.

The airport is adjacent to a museum detailing the desert training camps of General Patton but we decided the cost was too steep given that we would not be allowed to play on the tanks. Instead we got back to the plane and prepared for home. We did stop to take a picture of me next to the plane: 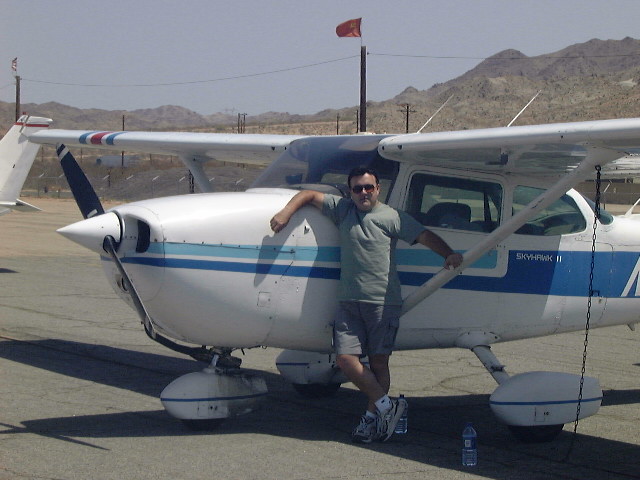 and one of Adrian also: 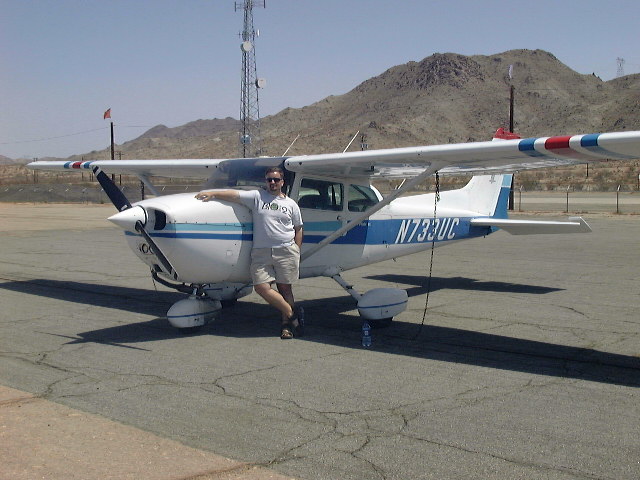 The flight back was pretty bumpy almost the whole way from take off to the San Diego area, and not very pleasant because of it. We got cleared for 28L as usual but I have no notes in my logbook as to how the landing went. The plane still flies and Adrian has flown with me since so I assume it can’t have been that bad.