This was my first weekend cross-country, i.e. I would be taking the plane away over night, leaving it at a new destination! The Friday morning started with the marine layer over San Diego and a forest fire raging close to part of my route, a TFR (temprorary flight restriction) was in place to keep people out of the way. Up until 1pm I was convinced that it would not be happening and I had even told Teri I would drive over and we would drive to Laughlin. Around 1.30 I saw that the sky was clear at Montgomery and so I called Kimberly for advice; she did her best to make me believe the trip was a go, so I quickly packed a bag and headed to the airport.

This trip was to be the first flight that I used my GPS system and it proved to be fantastic, it enabled us to take routes that I doubt we could have managed by regular means. Outbound to Brawley I would use it to keep me away from the TFR, basically by keeping south of I-8 all the way out to Imperial. The flight was pretty uneventful until I got close enough to tune in the Imperial airport weather information. The winds were blowing at 26 knots, gusting to 29!! Imperial is close enough to Brawley that I could expect the same there. I used the GPS to go directly to the airport and performed what I thought was a very good traffic pattern. The winds were creating a fair crosswind and I landed slightly askew the runway which isn’t a very good thing but I was able to correct on the runway and taxied to parking. Once parked I called Teri to tell her I was at the airport which came as shock to her as I hadn’t told her of my change of plan. When she arrived the winds were still very strong and we therefore decided to stay in Brawley over night and leave in the morning whilst it was still cool and the winds likely to be quieter.

Saturday morning the winds were calm when we got to the airport, 733UC had survived the night and was ready to go: 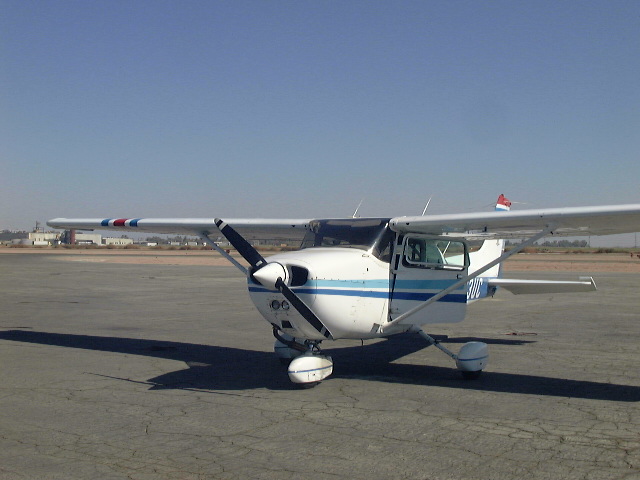 Irritatingly, Brawley is surrounded by restricted air-spaces and it isn’t posible to fly to Laughlin direct. Our route took us NW over the Salton Sea until we were past the restricted area and then we turned NE heading for the Colorado River. On reaching the river we headed north over Laka Havasu: 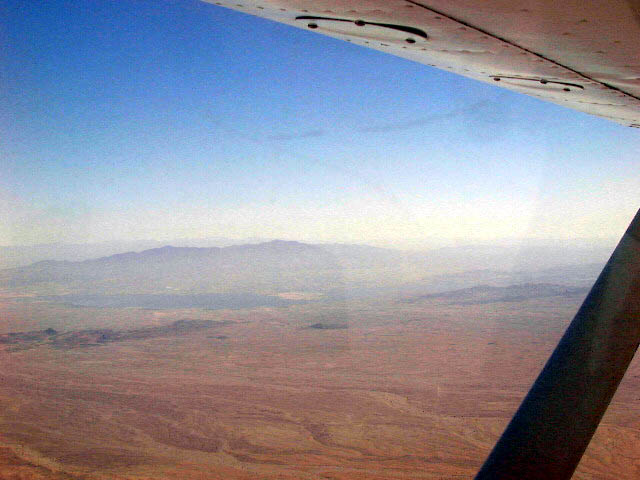 and onwards to Laughlin. You make your downwind leg behind the casinos and as we flew the pattern we could see that the river was extremely busy with various watercraft. We could also see the back of the Riverside Palms Resort, a lodging that we have a free voucher for (but was full for this weekend): 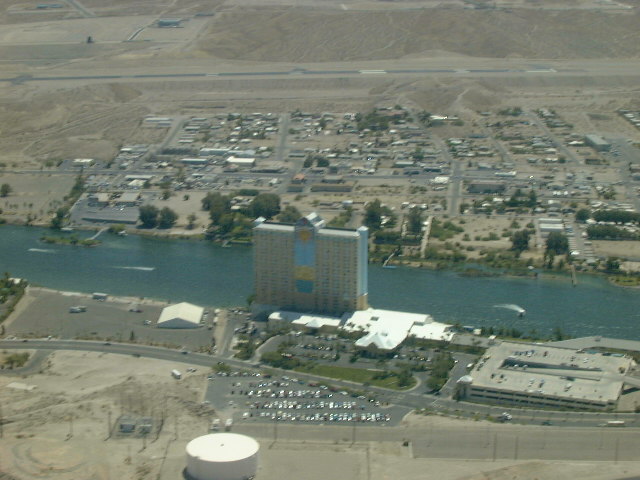 Our landing was uneventful and a long, steep, downhill taxi had us parked at the general aviation ramp. Someone came out to meet us on a cart and the shuttle to Harrah’s was waiting for us – how’s that for service!

Laughlin is very much a river sports resort (along with the gambling). I am not sure what there is to do if you are not into those two things. We discovered a cool slot machine called “Full of Sheep” that took some of our money. The Flamingo Hilton is noteworthy for its $1 magarittas which were not bad at all.

Sunday morning we got an early start and the hotel shuttle took us back to the airport. It seemed like
everyone had the same idea to get out of the area while it was still reasonably cool and the air calm. We saw many planes depart while we pre-flighted the plane. The parking area is very close to the water and I have read that you can get a water taxi from the airport to the hotels; we’ll have to try that next time: 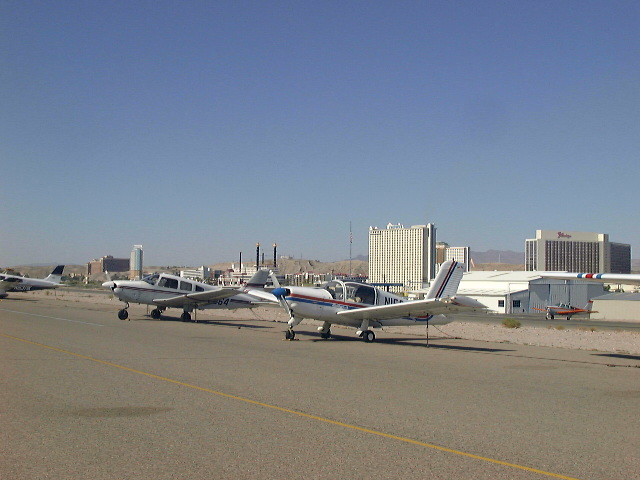 By the time we were ready to go the mad crowds had left and we had the airport environment to ourselves. When ready, we took runway 16 and headed south. On the way out you get a great view of the casinos on the river: 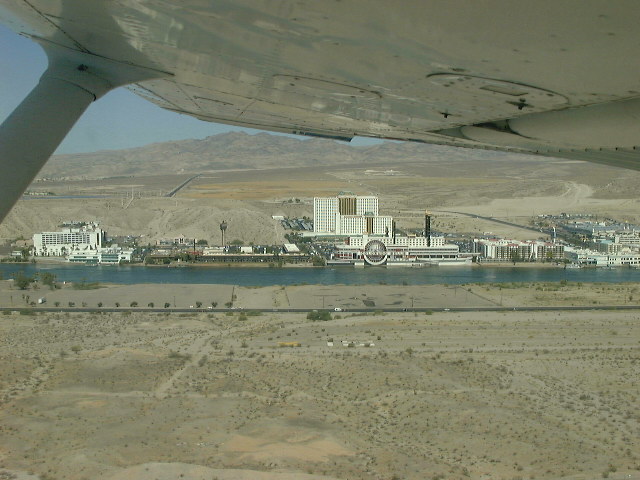 and we also had a good look at Harrah’s hotel, where we stayed: 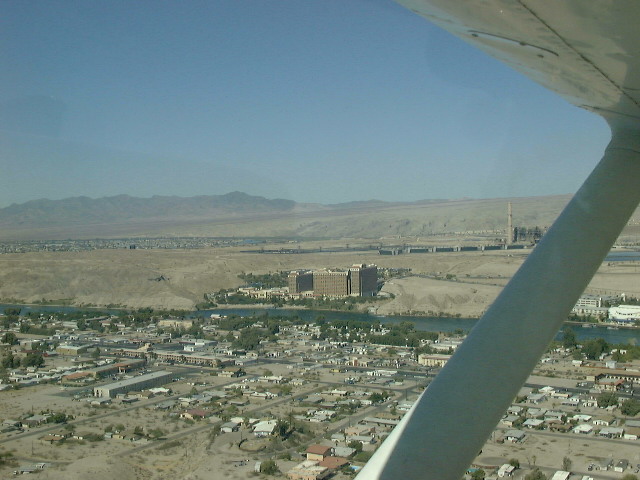 For our trip home we followed the Colorado River as far south as we could. On the way we passed Bullhead City: 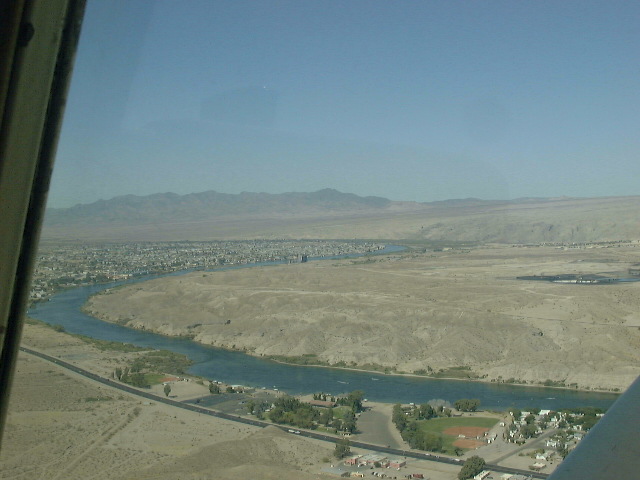 and the Havasu Lake Wildlife Refuge: 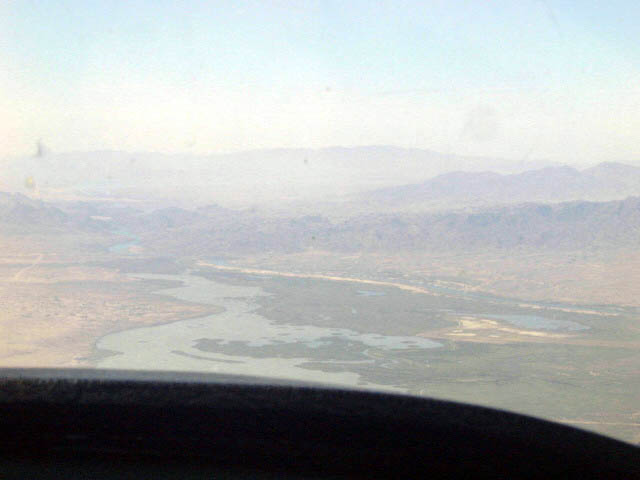 following the river southwards over Blythe. A little way past Blythe we turned westward towards Brawley. A direct route is impossible due to a combination of restricted air spaces standing in our path. Fortunately we had the GPS and it was able to keep me out of the forbidden airspaces as what amounted to a 180 turn around the edge of one zone and then another 180 to go around another. The first turn had us fly directly over Glamis but I could not see any off-road activity on the dunes – too hot, maybe?

We encountered our first bumpy air as we flew off the desert and over the fields and entered the pattern for Brawley airport, the base leg of the pattern being very choppy. It turned out to be too choppy and I was not lined up on final sufficiently and so I went around and tried again. A much wider pattern and had me lined up nicely and we were down on the ground.

After some cooling rest and lunch with Teri I was pleased to find that Montgomery Field was clear and would likely be fine for me to land at when I got there. So it was back into the plane and I waved Teri goodbye, heading south towards Imperial and the I-8 freeway. The air was smooth and I snapped a couple of pictures of the desert beneath me. In the second picture you might just be able to make out a trestle rail bridge in the middle of the picture. 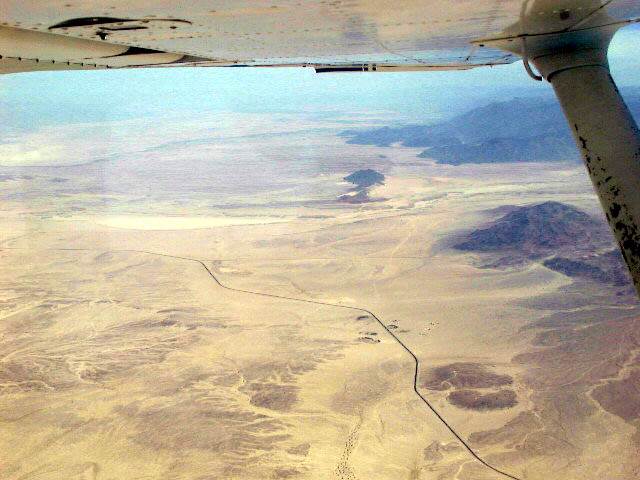 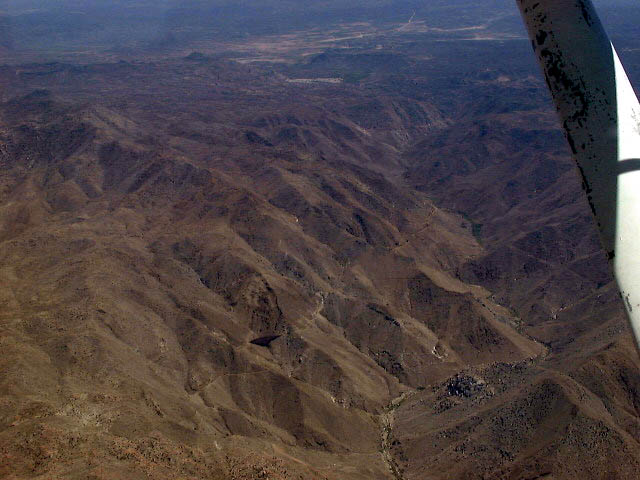 Over Live Oak Springs the air became quite bumpy as I alternately lost and gained altitude without being able to do a whole lot about it. This continued until I descended past Alpine and things got comfortably smoother. I did manage to take this picture of Barret Lake: 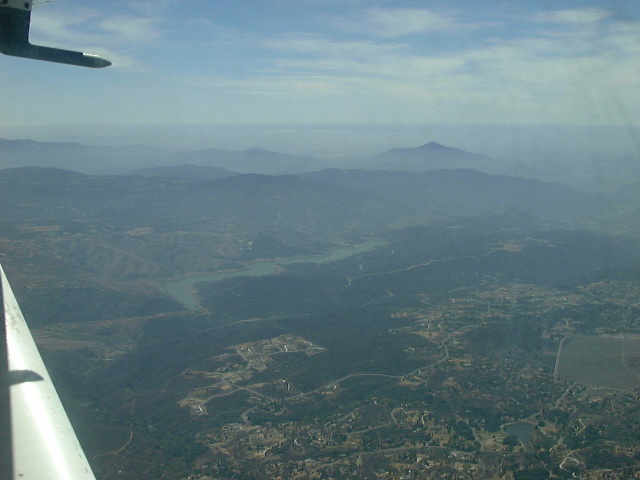 I had been listening to Montgomery Tower on the way in and it sounded very busy, the controller seldom pausing for breath. I couldn’t find a break in the airwave when I reached Gillispie so I was heading to Mt Helix to give me some time. As I turned to the left I saw another 172 fly towards me and over head at fairly close quarters; I wonder if they ever saw me? I got the controller’s attention and was cleared for the usual straight-in Runway 28L. At about 2 miles out I was told that a plane would be taking the runway and holding in position (presumably until after I landed) but as soon as I acknowledged the information I saw the plane take off! Not sure what happened there, I did not hear any instruction to take off or, as I expected, a verbal smacking for leaving without permission. I was a little high when I reached the runway and just as I hit the tarmac the nose of the plane moved left and I landed at a slight angle to the runway which was very uncomfortable and took quite a lot of effort to correct. For a while I thought I was going to go off the runway on to the grass, a very dissatisfactory ending to a great weekend away. Not sure if it was the end result of 3.5 hours of flying or a problem with my technique; the other landings had been fair to good but this is now two landings in a row on 28L… I might take Kimberly up for some touch and goes have her watch and advise.

All in all, a great first weekend flight.